Ah, the joys of being an instructor. An educator, provider of information, leader, and so much more. Every time I feel like I have a full grasp of what I am supposed to do, something new surprises me and presents itself as a challenge, further adding to the aforementioned joy.

I started teaching full-time two years ago, but here’s the thing, I did not teach just one topic, but rather an entire diploma in Hotel Management. To make matters more interesting, I also started teaching yoga around the same time. That is when the true dilemma began.

Dress code: Professional
Tone: Powerful
Message: Own or operate your own Hotel/Restaurant and, of course, make money.

Some days I taught one or the other, so it was easy to maintain two different personas. When teaching at the college I showed up in a business suit, printed my notes, met with students to discuss career goals, and then taught three hour lectures. The classes were structured and were taught from textbooks with little room for creativity. Emphasis was on policies and procedures, and disciplinary action was frequently taken. I spoke with a level of gusto, exhibiting a false sense of power, which allowed the students to believe that I was a credit to my trade.

On days that I taught yoga, I showed up with my mat, my music, a relaxed outfit, and a calming smile. I spoke gently, nodded my head a lot and listened to students before and after class. My stride was slow, cat-like, as I lightly touched one of the yogi’s arms while walking past them. With the depth of my breath I guided the room, but was cautiously aware that everyone had different needs, and I adjusted my teaching accordingly.

The days I taught both – shipwreck. I came home with a headache, tired from giving 100 per cent to two different personalities.

The dilemma was first brought to light when some of the students who attended my Hotel Management class decided to come to yoga. For the first few minutes I was extremely uncomfortable. I did not want to break the facade of being an all-powerful leader, and I was not prepared for them to see the “yoga” me. As soon as I got comfortable and started using my yoga voice, their discomfort became visible. This was someone they did not recognize, which as a result allowed them to assume that this version was…fake. Hence, the change began.

First step was to recognize that both these personas were vastly different, and none of them were really me. This took a lot of work as it entailed unraveling layers that I had protected myself with for quite some time. Confidence levels staggered frequently, and every moment became a challenge. However, I soon discovered a happy medium – a person who was the closest representation of what I felt inside. Second step was to try to find the similarities between the two past personas, the ones that I liked about myself, and the ones that would ultimately shine. This, too, was challenging, but not impossible.

To start the process of converting back to “Rubika” I decided to treat my hospitality classes like a yoga session. I applied my yoga rules (as many as I reasonably could) to my class, and awaited the reaction. I realized that students started opening up to me more, discussing their lives more, and also became more receptive to what I had to say. I maintained a threshold, however, because the education level and material could not be compromised.

Now I had to introduce a new version of me in yoga. I knew this would be a gradual process since I already had an image that seemed to work. I started by raising my volume of speech to its natural form – this raised a few eyebrows, but attendance remained the same. Once this was maintained, I started adding my sense of humour to the room, all while ensuring the integrity of the same. I sought feedback from close ones who attended the class regularly, and they did their best to keep me in track. Soon the class of four became a class of six, and now it averages eight to 12 attendees.

Almost a year later – Rubika emerged. Now, those who attend both different classes still experience the same human in front of them; no gimmicks, no falsifications, just one person holding the space. Disclaimer: this version may still not be perfect, but if there is anything I have learned from this experience it is that we all change, evolve, and grow. Society may teach us to present a version of ourselves that seems to work, but that person may not be who we really are or want to be. My hospitality students now learn about breathwork; it is not part of the curriculum but it is proving itself to be an essential life skill. My yoga attendees learn empathy, which is a pillar in hotel management education, and now a message that resonates along the board. Both classes experience something new, and more importantly, something authentic.

So I guess the dilemma of teaching is no longer a dilemma at this moment in time, but I accept the realities of this world and wait with open arms to see what new challenge will emerge. 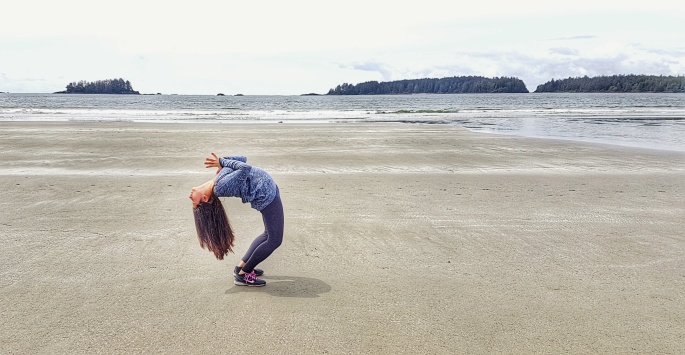